We’ve arrived- the end of one crazy adventure and on to the next.

I had intended to write more about my experience living in the Congo, but the whole process became next to impossible. On the rare occasion that we had internet, it was usually only for a few hours, and it was excruciatingly slow.

Even if I wrote ahead of time and waited for the internet, I was constantly in a mild state of panic, knowing the electricity would shut off any second. Outlets were also in short supply. It was truly an adrenaline rush when the electricity came back on- all of us scrambling to find at least one outlet to recharge our only means of connecting to rest of the world.

All to say, writing and posting a blog was sometimes a weeks-long endeavor.

When I finally got back to the states, I had no desire to revisit the Congo. Yes, the experience as a whole was life-changing, but so many aspects of my day-to-day were beyond challenging…emotionally more than anything.

But those chimps- those crazy, extraordinary, and sometimes terrifying chimps- forever touched my soul. I fell in love with all 54 of them, each with his or her distinct, funny personality and sometimes annoying quirks.

Goma, for example, an ornery, cantankerous guy who loved to mess with anyone who dared enter the sanctuary. No matter how deep into the forest he was, the minute you walked through the gate, he would suddenly be sitting in the same spot, perfectly positioned to dowse you with spit.

Goma and his cheeky smirk

It didn’t matter if I sprinted by him, he would always hit his target, meeting my gaze with a look of triumph, then disappearing back into the trees.

But even Goma nestled his way into my heart, gripping it tightly with those long, dexterous fingers and filling it up with awe and reverence.

They were ornery, intelligent, loving beings who taught me the extent to which animals feel emotions, both good and bad…exactly like we do. I saw this firsthand with our newest addition, Manoya, who was rescued the day before I got there.

She arrived emaciated, dehydrated and completely traumatized, then immediately had to be quarantined for 30 days. This meant she had to spend 24 hours a day with a caretaker in a large enclosure that was isolated from all the other animals.

The only details we know about her rescue is that the authorities found her going through customs, stuffed in a tiny crate. She was then handed over to the military who brought her to us by helicopter. 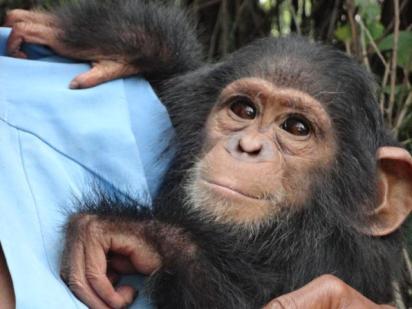 Namoya right after she arrived

Every time I would check on her from a distance, the look on her face was beyond traumatized…it was sheer heartbreak.

Each of our chimps had a similar story (see Casualties of the Trade), all tortured in some way or another, stuffed in some inhumane contraption, most likely after seeing their entire families murdered.

But despite all of this, or probably because of it, they welcome each new orphan into their chaotic, not-so-functional family…just as they had me. Although be clear, this integration process isn’t without its challenges: clashing personalities, jealousy, power struggles…like any family, I suppose.

I had survived. Six very long months later, I was walking up to the sanctuary for the last time…to say goodbye to my furry favorite.

I’ve already shared the chimp crush I had on Kongo (here), so I tried to go see him as much as I could (when I wasn’t working or hiding out trying to avoid running into ‘C’).

Kongo and I quickly established our routine, accompanying each other around the perimeter of the forest enclosure, getting to know each others’ expressions and body language. I learned what his favorite foods were, what type of leaves he preferred and where his favorite tree was. I gradually discovered who his favorite chimp buddies were and the ones who avoided him at all costs (Goma being one of them). I got to know his different moods- when he was grumpy, playful, ornery, or bored.

That day finally arrived, and I knew it would be the last time I’d see him.

That day was bizarre…as if Kongo knew I was leaving. Every day before, he would greet me at the gate and escort me down our usual path.  I waited a few minutes, looking for him up in the trees. I did my best version of a chimp call (which is pathetic, I might add). But nothing.

I started back toward the entrance, and there he was, peering out from behind the trees. I sat down and waited for him to come out. He just sat there, staring at me and then disappeared back into the forest.

Now I was pissed. This was seriously how he was going to end it? I waited a few more minutes, then stormed out, slamming the gate behind me.

Realizing I had just thrown a temper tantrum because a chimp wouldn’t come ‘say goodbye’ to me, I pulled myself together and went back in.

There he was, sitting in the same spot where we always met. He didn’t even look at me before he started down the path, finally stopping to make sure I was following, but never letting me catch up.

When we turned the corner of our last stretch, he finally sat down but kept his back to me. I couldn’t help but laugh. He was clearly not going to make this easy.

I rummaged through my bag and pulled out a handful of groundnuts, sliding them under the fence. He pretended not to see and waited until I sat back down to casually reach over and grab them. Next was sliced mango, his second favorite treat. He ate them but still acted like he wasn’t interested. I waited a few minutes before I pulled out his favorite, knowing that would do the trick.

He finally turned around to face me, looking at me intensely, then down at my bag, then turned sideways to avoid eye contact.

I launched into my goodbye speech, lying, saying I would be back, and reminding him there would be another ‘save the world’ type who would take my place.

I slid a larger than normal portion of figs under the fence. He launched forward, grabbed as many as he could, and disappeared into the trees.

And that was it.

I made my back down the path home, stopping one last time to see if I could spot him in the trees. And there was Goma, staring down with his head cocked back, that same cheeky look on his face.

Just behind him and further up, I saw the leaves start to rustle. A flash of black plunged down, caught a limb and then soared across to catch another and then another. Within a matter of seconds, the forest turned into complete chaos- chimps flying tree to tree, leaves shaking violently as the limbs tried to rebound from the weight of one chimp after the other slamming down on them.

Goma finally plunged in, instigating more deafening screams that made even the staff members stop and look up.

I watched until the madness died down and the leaves became still. Several climbed to the top and perched on the branches, some grouped together, some alone, most of them looking down.

I’d seen these crazy displays before, but this one was sheer mayhem. I, of course, convinced myself that this one was for me…a dramatic farewell…

And I have a good idea who was behind it.

* Between 5-10 chimpanzees are slaughtered in the process of trying to capture one baby chimp.

*Goma and I eventually made a truce, and I was allowed safe passage, if and only if he was presented with a handful of peanuts upon my entry. 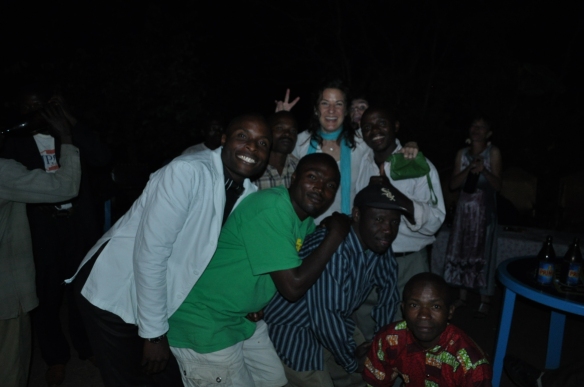 Below is the link to the documentary that inspired me to go to the Congo:

Please help support the efforts of the sanctuary to protect these guys by donating here.